Colton is currently studying English literature and writing at PSU. This is his first term, yet also his senior year. He transferred from Marylhurst University after they closed. 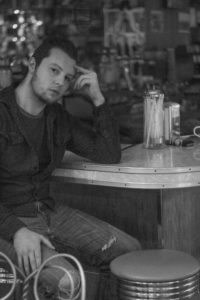 Q: Who or what influences and inspires your art the most?

A: I am drawn to the writers associated with Gordon Lish, and subsequently the Dangerous Writers here in Portland. I pay a lot of attention to compression and lyricism—the music of prose, so to speak. Reading Chuck Palahniuk really set me off. Then I was exposed to Amy Hempel, Tom Spanbauer, Mary Robison, Monica Drake, Lidia Yuknavitch, Margaret Malone…the list goes on.

I care more for prose stylists than good old-fashioned story telling, and I blame Jay Ponteri for that. He got me started on Gary Lutz.

The dirty truth of it all is that I am most inspired by bad writing. Sometimes I’ll be reading through a book I don’t care for, and I think, “You know what? Screw it. I can do better. If this trash can make it into print, then what’s stopping me?”

I think all makers share this sentiment one way or another.

Q: How do you go about transforming an idea into a finished project?

A: It’s tricky, because I often approach my desk as blank as the page I intend to fill. I often just start with a phrase, or a cute little truism, and work from there.  Other times I let an idea incubate for as long as possible, and then I work on it just when I worry I’m going to lose it.

Almost as a rule, I start and finish a project pencil to paper. Then when it’s finished, I transcribe it to type, editing and revising as I go. From there it’s all about receiving your piece as though it were something completely novel, and asking it, “What more do you need?”

Q: How does your daily life inspire your art?

A: When you’re alone enough, making becomes a form of reaching. When you produce a piece and put it out in the world, you might find yourself asked to go to readings, and there you can meet people. It used to be that I would write so that I could be a part of a writing group; its almost like the pieces that you make is your fare to join the party. Other times, making becomes reaching for yourself, and writing becomes a communion between you and your mysterious other selves.

You walk around all day on a campus where you don’t know anyone. You get stuck in some sort of social function where everybody says the same things they always say. Somehow, all that small talk paradoxically exacerbates your own loneliness.

More than anything, writing, for me anyway, is a place where I get to exorcise my demons, and cope with things that I otherwise don’t have agency over. Besides, what else is there to do at four in the morning?

Q: What themes do you like to explore in your art?

A: I often write about people coming into communion with each other, or at least someone in the act of reaching. I also spend a lot of time on the body and the slippery nature of language. It’s not that I liketo explore any themes in particular. I don’t sit down and say, “Today I am going to write about the complexities between friendship and sexuality, using the science of magnets as a framing device.” That’s silly! I just meander on the page until I find something to lock onto.

Q: What is your favorite book?

A: That’s such a hard question. That’s like trying to choose which one of your kids is your favorite. I can say that I have memorized a lot of quotes from Chuck Palahniuk’s “Invisible Monsters.”